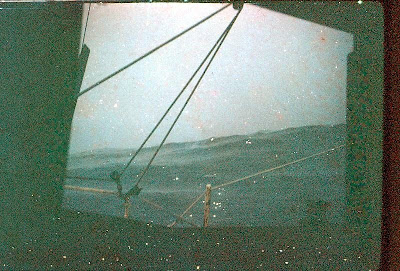 Dear Phyl,
We are now anchored off the Balboa Yacht Club and expect to leave here in two days time for the Galapagos Islands, which are about 1000 miles southwest from here. I wrote from Martinique to say that we hoped to make a quick passage to Colon. This was not to be. We had our roughest passage yet, on this trip.

Leaving Fort de France at about 4.30 in the afternoon with a fresh breeze, we made good time for six days, bowling along before winds of from force 3 to 5.

The sixth night found us off the coast of Aruba where we spent an anxious few hours trying to identify the lights. The following day, we crossed the gulf of Maracaibo with the wind gradually increasing in strength and us gradually reefing down to match it. By nightfall, we were off Point Gallinas, with the wind right behind us and gusting at Force 8.

All that night we lay to with no sail, taking the sea’s on our starboard quarter and hoping for better weather in the morning. No such luck. In the next six days we were only able to put up sail twice and then only the small red jib of 40 sq ft for a few hours each time. The rest of the time we spent battened down below, trying to read or sleep, with the seas getting larger and longer and the wind whining over us.

Occasionally a sea would break over us, and spray would find its way in through the louvres in the washboards. Almost everything in the boat became moist with either spray or condensation we could feel ourselves getting dirtier and dirtier without being able to do a thing about it. With the violent rolling of the boat, every movement became an extreme effort. Meals were limited to porridge for breakfast and stew for tea, this needing only one saucepan. Baking bread was out. Even tea and coffee making required three hands. It was impossible to put anything down without it falling over.

Using the head became an acrobatical feat. The self draining cockpit took care of most of the spray which came over our stern, but a certain amount, inevitably found its way through the sides of the locker lids into the bilge. Periodically I would clamber out in my safety harness to pump the bilge and get some fresh air. I soon found from experience that it was easier to strip off to do this rather than take off wet clothes every time I came back in. Sitting on the bridge deck with my back to the washboards and my hands stretched out, gripping the combing each side I would watch the seas rolling down on us from astern.
By the 5th day, these had built up to massive proportions. The Yacht would often be in a trough and a huge sea would bear down on us, increasing in size until it loomed, seemingly, mast high, right over us, threatening to roll us end over end. Then with hissing of water it would lift our transom and surge under us leaving the shuddering Stella to wait for the next one. During all this, I would be hanging on for dear life and cowering down to lessen the blow of the wall of water that I was expecting to pour down on me. I came to realize that these large waves seldom came aboard us. The ones that caused us most trouble were the medium size ones that appeared to rise up from nowhere and hit us at an angle. These would slop into the cockpit through the cracks in the hatch and washboards. One of these, catching us right on the beam, fell, square on our starboard dodger and flattened two stanchions back onto our coach roof.

At the end of these 6 days, our morale was at its lowest, at one point I had gashed the ball of my foot and had quite a job to stop it bleeding. Although not really frightened, we were both mentally and physically worn out with the movement and the noise. (Note from Penny:- Every time Dad went outside to pump the bilge, I was really scared that he would get washed overboard and I would be left alone on the boat with no hope of rescuing him) We were later to learn that Pierre in ‘Kantredi’ was in the same storm as us and his boat did a complete roll. He managed to limp into the port of Colon under a jury rig looking very much the worse for wear, eyes completely bloodshot.

We had not the slightest idea of our position, within 50 or 60 miles. At a guess we had drifted at a rate of about 1 ½ knots, (which turned out to be fairly accurate) but whether we had gone straight downwind or to the north or south we did not know. The whole of that time, I had a horrible sinking feeling about piling up on the shore at Colon.

On the evening of the 6th day the wind began to ease but the sea was, of course, much slower to go down. In the morning we were able to put up our working jib and later on our genoa was goose winged. By noon the clouds had started to clear and we took a sight, followed by another three hours later. From the position these gave us we had drifted 230 miles in the 6 days. It was lucky for us that the wind had been in the right direction for us (South East by East) and had kept us off the coast.

On the 13th day, we put out a fishing line and had a bite and started to pull it in. Suddenly there was a terrific tug on it and it went slack. This was to happen to us quite a few times on the rest of our trip and we could only conclude that a shark had taken the fish we had caught.

On the afternoon of the 15th day we sailed into the harbour at Colon and anchored off pier 9 as directed in the Eric Hiscock book. An immigration officer came aboard and spent nearly an hour with us, filling out various forms, one with six carbon copies, the last two of which were indecipherable. When we asked what happened to all this fiction we were told that it went into the files and was promptly forgotten.

After the free and easy way in which we had entered all the previous ports we had been in, we were not very impressed by the American brand of freedom. We couldn’t help wondering if Russia could be much worse. Picture, if you can, Stella Mira anchored 300 yards from the Panama Yacht Club. Me, having to row, against a strong wind and sea, in a rubber dinghy 600yds to the docks (outboards being prohibited without a special license, for which a test is required) where I must obtain 3 copies of a form and then walk ½ a mile to the yacht club, get them signed, walk back to the docks, hand in one at the gate and take one to the port captain, then row back to my boat, before proceeding to anchor off the yacht club.

The Americans we met were individually, very nice people, and were very kind and helpful to us but the canal company seems to have a form for everything.

We were almost surprised to find that when we went to use their toilets, we only needed blank forms!
Posted by Penny at 6:55 AM

how about a map showiny your route?

Great story, but what about the rest of the voyage to Australia?

Thanks for writing about your adventures sailing to Australia,
I really have enjoyed reading about you and your father.

Even today with all the advances in electronics, safety and navigation equipment the voyage would be a big achievement but in the 1960's; magnificent.

I hope that you will soon be able to add a further account of your adventures for me to (enviously) read.

What an amazing,understated piece of seamanship.I think you put all of us contempory Stella owners firmly in the shade.It seems a shame but I suspect few of the existing boats would still be sound enough to take such punishment.Inspirational!