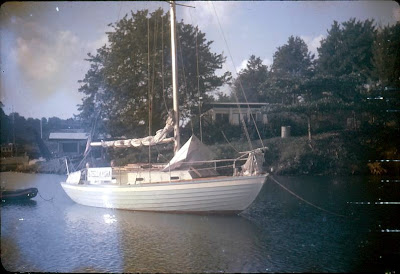 Stella anchored at Castries, St Lucia
In the morning, just as we finished breakfast a dinghy arrived and we were warmly greeted by a chap we had met in Barbados, Davey Keefe, he had been crew on a large boat called Artemis, of which his brother was skipper. He was now skippering his brother’s own boat “Sirius”, a gaff ketch which his brother had sailed out three years previously, and Davey was now fitting out intending to day charter. We mentioned that we were very hard up, and also that we wanted our boat slipped. He invited us to come and anchor near him and said that if Penny would cook us all a good meal he would provide the food. It seems he had been living on baked beans and the like for the last three weeks. We all straightaway went into town and bought the makings of a good meal and then while he motored back we prepared to follow.

Before we could leave, we met the people from the Nicholson who told us that they had been lucky enough to get booked in this very day to go up on the local slip (due to a cancellation), and the price quoted seemed a reasonable one. The outcome of all this, was that over a slap up meal that evening, we told our host, Davey, that we intended to inquire about slipping here in Castries, and about our engine trouble. It turned out that he was an engineer by trade and had the facilities to remetal our bearings. We came to an arrangement that he would provide the food if Penny cooked for the three of us, whilst I helped him refit ‘Sirius’, in exchange for which he would help us with our engine. The earliest booking I could get for the slip was three weeks ahead but the price would be even less that I had hoped for.

In practice, everything worked out very well. Stella Mira was on the slip for two days during which time I antifouled the bottom, Davey and I took out the engine and the shaft and Davey remetalled the bearings and checked over the engine. Sirius is now sailing and hopes to charter, shortly.

We came to know and to like Davey immensely in this short time. He is a short, dapper chap, with a beard, and has a great sense of humour and is fun to be with. He comes from Dorset and worked in Canada for two years, then decided that life was too short to be wasted so packed up his job, bought an old car and as he puts it, bummed his way through Canada and the U.S., climbing mountains, which is his other hobby. He is 29. We were all three very moved when it came to parting time. Whilst at St Lucia we met several other interesting people including Grace Gantor, of whom he had heard even before we left the Canaries.

Grace runs a chandlery business and is a very knowledgeable person about the islands and yachts that have visited them. In character, she reminds me very much of Minnie (Sim's mother). We went to a small party at her bungalow to celebrate the roof going on. Penny got drunker than she has ever been before but didn’t show it until she got up to leave, Davey was nearly as bad. Imagine us going to Sirius in an outboard dinghy with the intention of making coffee, at 3 am. Davey steering an erratic course in and out of the boats in the harbour, reaching Sirius and Penny half on Sirius and half in the dinghy incapable of helping herself.
Afterwards, me making hot drinks for both of them, neither of them capable of holding them, and then Penny getting hysterical and crying “Take me home, Dad. I’m so ashamed, take me home”. Then bundling her up on deck again, dropping her bodily into the rubber dinghy, rowing back to Stella, hoisting her on board and putting her to bed. What a life!
Sirius had an initial tryout, sailing about 10 miles up the coast of St Lucia, so we accompanied her in the Stella and sailed rings around her. When we got there we went on board Sirius and had a bit of a picnic.
On another day all the visiting yachts in the harbour (about 10) along with local dignatories were invited to an evening on board a visiting Canadian warship. We were grandly announced as "Captain Simpkins and his daughter", having never been called captain before I felt rather embarrassed. Roscops, who we had met at Teneriffe were also there.

From Castries to Fort De France, Martinique is around 40 miles. For this trip we motored for the first two miles in a flat calm. A breeze then came down on us from our starboard quarter, and soon got itself up to a pleasant force 4. We ran before this under main and genoa, enjoying the best sail we had had for ages. With a clean bottom, the boat was a pleasure to handle. By 3 pm we were in Martinique, the anchor was down and the sails were stowed.
Whilst waiting for pratique we identified ‘Mistral’, belonging to Julio, a Spanish chap we had been friendly with in Las Palmas (he sailed with us in the race to Fuertoventura) and whom we had last seen at Barbados, and also 'Kantreidi' sailed by Pierre, a Swiss we had also met in Las Palmas.

Both are bound for Panama and the Pacific, so we shall probably see them again, there. They are both here fitting out and we will all leave within a few days of each other, so we shall perhaps make a race of it. Our three boats are all about the same size.

With luck, we should all be going through the canal at the same time, together with the Flemings on ‘She’ and the Hiscocks on ‘Wanderer IV’.

It is 1200 miles to Christobal Colon, give or take a few, and according to the chart there is a favourable current of two knots, so with luck we could be there in twelve days. When we get past Panama we should make better time, as there are fewer places to stop at.

Our money is dwindling down, but we estimate that we have enough food on board for nearly 150 days by which time we hope to be home and dry (touch wood).

There are lots of things I would like to ask you but by the time I get the answers I would have forgotten the questions. Anyway I know that when our mail does catch up with us, you will have told us all the news.

I hope you are all well and that you will forgive me for causing so much trouble.
Goodbye for now,
All my love,
Sim.
Posted by Penny at 7:15 AM

Great story!
Have been anxiously awaiting more.
Thanks.

Hi Penny
I just accidentally found your blog and what an honest gem it is. Your father writes beautifully with wry humour (I especially liked description of entry into Vigo, warships and chain between keel and rudder!). I have an old timber folkboat moored in Sydney Harbour and am currently doing it up for some serious blue water so of course am greatly interested and can't wait for more.
Regards Ian